“All is mystery; but he is a slave who will not struggle to penetrate the dark veil”

After a long time…or should I say this year after Guru, Chini Kum…I guess there was no movie which you could at least watch with the urge to see what’s the end…!

“Cherish forever what makes you unique, ‘cuz you’re really a yawn if it goes” ~ Bette Midler

For some reason I find this actor ..or rather I should say I think he takes his profession a bit seriously than just mere making money out of it … lol!

“Acting deals with very delicate emotions. It is not putting up a mask. Each time an actor acts he does not hide; he exposes himself.” ~ Rodney Dangerfield

Its some new girl Urvashi Sharma…I think she suited for the plot and story and yes Akshaye…as I said I like this actor…his acting and his expressions ;)! Yeah but you will have to tolerate Bobby Deol that’s the tragic part of it but believe me even he would have been surprised to see himself doing a good job!

“Of course life is bizarre, the more bizarre it gets, the more interesting it is. The only way to approach it is to make yourself some popcorn and enjoy the show.” 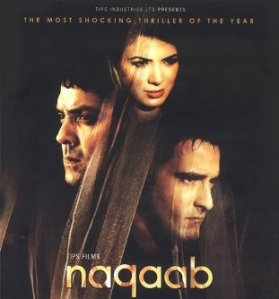 Abbas-Mastan who have made many other hit movies such as Khiladi, Baazigar, Soldier, Baadshah, Ajanabee, Humraaz…etc have done a good job by making this movie …Oh gosh! I haven’t yet mentioned the name of the movie :O….let me raise the curtain …its “Naqaab” – meaning “Veil”!

“Our own self-love draws a thick veil between us and our faults.” ~ Lord Chesterfield

Songs are also fine …doesn’t make you bore…I liked a dance sequence between Akshaye and the Heroine of this movie Urvashi….! I guess it had some real performance practice that they did 😉

If you don’t have anything to do and want to chill out in this hot weather then take a chilled drink and watch this movie…its not that regrettable …lol! In short as usual Akshaye Khanna steals the show with his power-packed performance.

“Make no display of your talents or attainments; for every one will clearly see, admire, and acknowledge them, so long as you cover them with the beautiful veil of modesty” ~ Nathaniel Emmons

“Age is not a particularly interesting subject. Anyone can get old. All you have to do is live long enough.” ~ Groucho Marx

7 thoughts on ““All is mystery; but he is a slave who will not struggle to penetrate the dark veil””