“For all sad words of tongue and pen, The saddest are these, ‘It might have been’.”

At times being busy is good as you don’t get to hear or read any news but then how far can you escape from truth.
Yesterday was busy but today when I checked news, I read Ahmad Faraz died on August 25th, 2008. It is shocking news though I know his health was not so good. But it was one of the best ways to see that we still have great Urdu writing poets, who are compared with Mohammad Iqbal and Faiz like great poets.

“Poetry is a deal of joy and pain and wonder, with a dash of the dictionary”. ~Kahlil Gibran

I am like a hungry person running around to read about him and his news, probably to make sure that the news is not just a rumor as I remember this was a rumor one time.

I feel the emptiness though I have never met the poet personally but Ahmad Faraz being one of my favorite poets, I always kept him near my heart just like Javed sahib and Gulzar.

He was born in Nowshera, Pakistan and brother of Syed Masood Kausar. In an interview with Rediff he recalls how his father, a teacher, once bought clothes for him on Eid. He didn’t like the clothes meant for him, but preferred the ones meant for his elder brother. This lead him to write his first couplet:
Layen hain sab ke liye kapre sale se (He brought clothes for everybody from the sale)
Layen hain hamare liye kambal jail se (For me he brought a blanket from jail)
He was told by his parents once to learn mathematics from a female class fellow during the summer vacation. “I was weak in mathematics and geography. I still don’t remember maps and roads”.
Instead of learning mathematics he played bait-bazi with her, a game in which one person recites a couplet and the other one recites another couplet starting from the last letter of the previous one. He always lost, even though he memorized hundreds of couplets for her, but when he started manufacturing his own couplets she couldn’t catch him anymore. Coming from a respectable family of Syeds, descendents of ”Haji Bahadar” a famous saint of Kohat, he moved to Peshawar with entire family. Studied in famous Edwards College, Peshawar and then did his Masters in Urdu and Persian. Initially Syed Ahmad Shah Faraz thus became Ahmed Faraz.
During his college time, Faiz Ahmed Faiz and Ali Sardar Jafri were the best progressive poets, who impressed him and became his role models. Ahmed Faraz initially worked as a script writer at Radio Pakistan Peshawar and then moved on to teach Urdu at Peshawar University. In 1976, he became the founding Director General (Later Chairman) of Pakistan Academy of Letters. 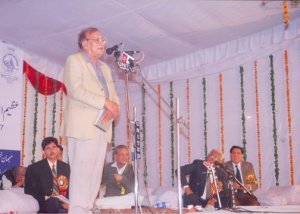 On this day I would like to share one of his poetry translated in English and I pay my condolences to his family and his fans.

Dreams do not die.

Dreams are not hearts, nor eyes or breath
Which shattered, will scatter (or)
Die with the death of the body.
Dreams do not die.
Dreams are light, life, wind,
Which can not be stopped by mountains black,
Which do not burn in the hells of cruelty,
Like light and life and wind, they
Do not bow down even in graveyards.
Dreams are letters,
Dreams are illumination,
Dreams are Socrates,
Dreams are Mansur!’

Like dreams the poetry never dies….this is what I believe. His thoughts will linger in our hearts forever

10 thoughts on ““For all sad words of tongue and pen, The saddest are these, ‘It might have been’.””