A Bart ride one afternoon…! 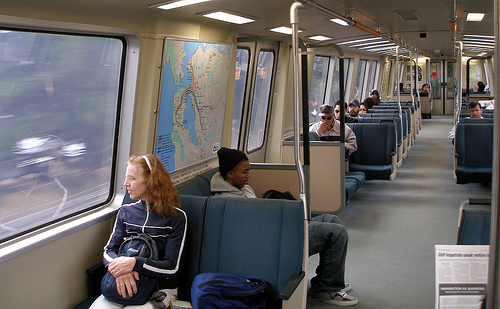 This afternoon for some reason instead of taking Uber I decided to take Bart.

When you are not used to public transport for long time, it can freak you out. I was making sure I am getting into the right train and then when I did get into one, I made sure I am sitting at a seat which is near the door and was constantly looking at the window to check which station it is.

“Time goes faster the more hollow it is. Lives with no meaning go straight past you, like trains that don’t stop at your station.” ~ Carlos Ruiz Zafon

I had been a heavy user of public transport when I was in Toronto, Canada and to tell you the truth I enjoyed it even though the initial radar of alertness was always there about your surroundings but that I don’t look at as inexperience. I rather feel one should be cautious about their surroundings always.

“You can’t understand a city without using its public transportation system.” ~ Erol Ozan

Bart, I always have heard negative things whether it’s about the issues with the riders or with the train itself. All these thoughts were going through my mind but being positive as my habit I enjoyed the ride. Few people were getting off as their destination arrived and the train was getting empty or rather it was getting more spacious.

I saw three kids – I can say because there was a boy who could be of 4- 5 years old and he was being referred as Chris. Chris was getting bored and restless and one can see that because the other two people (boy and a girl) who looked as if they are a couple but very young may be around 18-19 years old and I don’t know their names. Chris was so restless that he started lying down on the seat and later on the floor of the train and I wondered why he is doing like that and how come the couple doesn’t say anything to him.

As I was thinking about it, the girl started calling him, Chris, get up why are you being like this? And the boy had no response.

After long time Chris got up and sat on the seat and I was in between busy looking at the name of the station as the train stopped.

The girl who was sitting with her boyfriend, looking at me she said, Ma’am are you a therapist by any chance?

I looked at her and smiled and said, ‘Why? You need help for Chris?

She smiled back at me as if nodding yes!

I looked at Chris who was turning his back to me and looking at his mother (by now I heard the conversation where she said you are not listening to your mom).

In a friendly way, I said – Chris, want to be my friend? Give me hi-five!

The mother or the girl as I referred above, said Chris see the lady wants to be your friend. At this, Chris got shy and he started hiding his face.

By that time the boy who was sitting next to Chris’s mother said, why you taking help from strangers?

The girl/mother replied, well you’re not helping me either, so I asked for help at least it will keep him away from misbehaving.

It just took me to think, teenage lovers and probably became mother and all these responsibilities. I felt bad for Chris, because he needed someone who can understand him and probably spend time with him.

“Sometimes the greatest adventure is simply a conversation.” ~ Amadeus Wolfe

I wish I could do something, but I cannot. As the train stopped at my destination, I got up from my seat and waved at Chris, saying Bye Chris, take care.

The mother/girl, immediately asked Chris to say – bye! He was still shy and instead the mother said – Bye lady and you have a great day and thank you!

I smiled back waving at her saying you too!

I reached home and shared the story with my daughter because she is 19 years old and I shared how I felt for that girl and her child.

Sometimes, kids are not kids anymore and those who are kids they don’t get to be kids anymore!!! ~ Dawn