After a hectic time in Rome with 90+ degrees, we planned to come to Florence via train. It was interesting as early morning we got ready and went in a taxi which was sent to us via some friends that we met in Rome. Social media doesn’t only create chaos and hatred but it also brings people together. 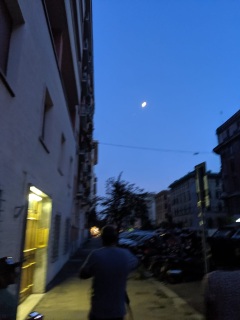 These friends suggested this taxi and the taxi guy was a nice guy and as part of his 20 years being in Rome he had some advice to give it to us while we travel in train.
After listening to his stories and alerts, I literally felt how can one travel peacefully if all the time you have to keep an eye on people as anyone can come push up, snatch your bag and run away…! As a mother of a 12 year I was more worried for my son as he is a carefree person and moreover he believes everyone is good and there’s no one in this world who is bad guy because bad guys are only in movies according to him.
Somehow, we reached station and said addio to the driver and checked for our train timings and decided to quickly grab breakfast as we had sometime before catching our train to Florence.
After breakfast, it was kind of relief when we sat in our seats. The main question that was bothering for all of us was about the room… How will this one be? 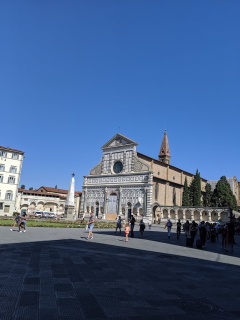 We reached Florence, a small beautiful and tidy city. You can feel the ancientness as you walk around… The roads made out of stone, the narrow buildings with huge wooden doors and when you open that door you will find many families living inside that door in different apartments. Amazing way, it reminded me of houses in Punjab villages. Anyhow, we had time to check in hence we kept our luggage at the office and walked around the city with the map. It was amazing how there were churches, cathedrals and monuments all around the city with restaurant and gifts shops and I see cops all around.
One thing I loved about this place is that they didn’t change anything about their city, yet they have all the brand name clothing and fashion designer shops for everything you can think of. This city has not lost its authenticity with shopping malls and I think that’s a blessing!
It was amazing that we were welcomed with a band that was marching with everyone in their costume and getting into the cathedral, I loved it but only worried for them with costumes in this heat…!
We had gelatos and went around the cathedral and the Duomo. Everywhere it’s long lines and here we decided not to get in. I think the most we walked around in Florence and that was 6.9 miles. When you’re tired the food tastes good and you’re ready to eat big meal too..! One thing I have to admit that Pasta, Pizza all tastes so good as compared to US. 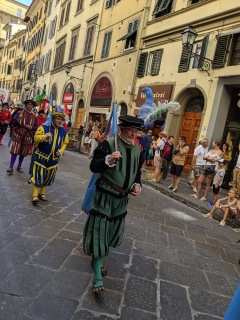 We happened to meet someone from India and as we discussed how they came here and what work they do, all that discussion brought us close enough that the person came with us to show places and because of them we were able to use the public transportation as well. 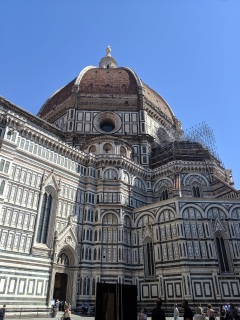 Florence, we had a full day and next day till 5 pm as we had plans to leave for Venice.
It was a long walk, talk and hopping on the bus until we figured the last stop was the Michelangelo’s hill.

It was like a festival there, people gather there to see the entire town of Florence with live music on one side and shopkeepers on the other with duplicate brand name leather bags, art related things for selling… And the main attraction being Michelangelo’s statue itself where people have queued up to take pictures.
We had our time too and enjoyed the view and the music!

Finally we decided to return back when we were invited for dinner and guess what the food was traditional Kerala food, it was beyond amazing! We were satisfied fully with their hospitality and love.
It was an amazing night that turned into next day already when we left for our room. All night I was thinking about the person as how they came to Italy from India, what work they were doing, helping and doing all kinds of jobs and then now as home nurse, taking care of some big shot Grandma who’s alone and is suffering from Alzheimer, but Govt appointed them to take care of the Grandma…! All these put me in thoughts about Grandma and her life and then this new person we met his life…! It’s really strange where you’re born and where you end up when you grow up and whom you take care of in old age..? Nothing is planned for anyone, it’s destiny!

All this and next day we got up to see Leaning Tower of Pisa. This was an amazing train ride watching the sunflower farming land and the houses which one cannot differentiate between India and Italy…! It was interesting when we were going in the train there were seats in such a way that we split sitting two each on different areas and suddenly a gentleman who was sitting alone in a section of four asking us to take that seat so we four can sit together. It was really a nice gesture, because one doesn’t have to… But then he said Namaste and nicely moved to opposite side of the seat!

The Pisa tower was amazing as once you read the history about it and how due to its unstable foundation the tilt happened then you’ll only say thank God for the gravity that they fixed so it didn’t fall…! It was scroching heat and yet like everyone we also tried pictures that would show as if we’re touching the tower or correcting it!!!😅

Return from Pisa was and then a satisfying lunch gave us our energy back as we had enough time to catch our train to Venice. 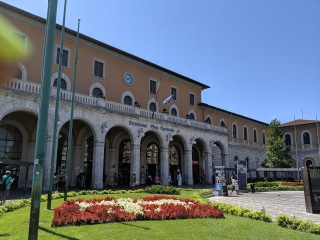 I was ready to say addio to Florence a beautiful city just like it’s meaning, like a flower🌺.
Beautiful memories with beautiful people, don’t know when I will come next but carrying all the love and gratitude in my heart 💕🙏! 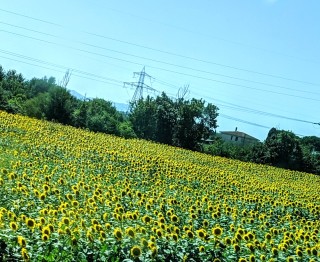